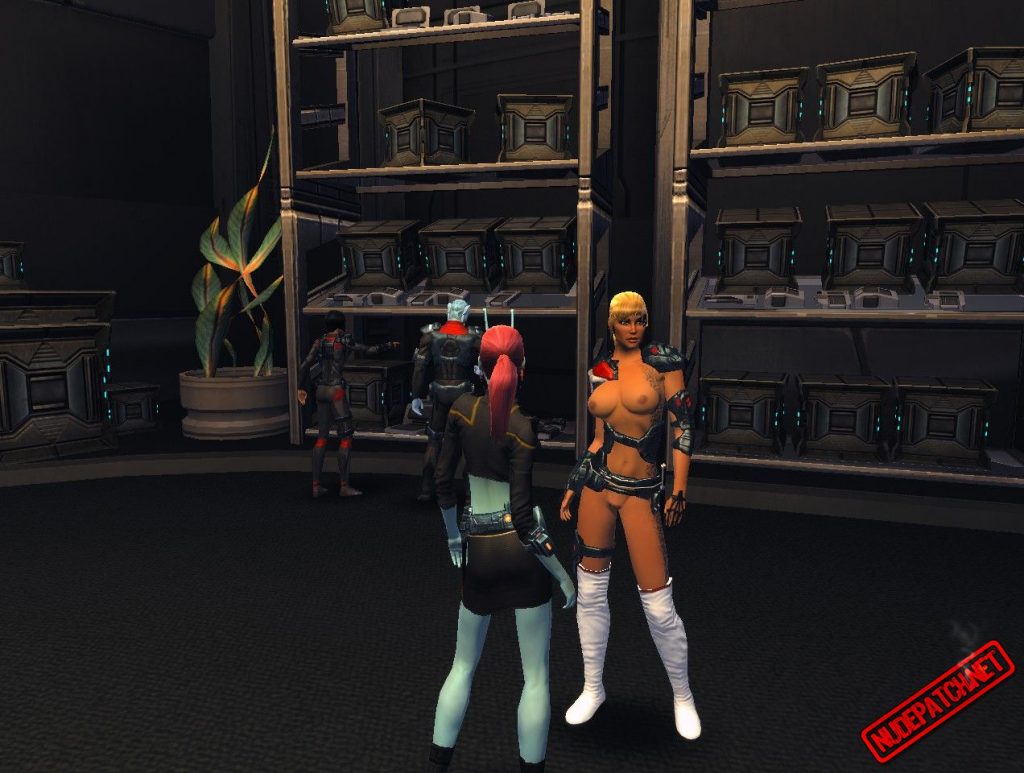 Contains all the modifications in the “Individual Removal Mods” category detailed below.

Orion Belts Remover
===================
Removes Orion belts. Cryptic did not give Orion females a “no belt” option when wearing bikini bottoms, so this removes the belts.

Orion Loincloths Remover
========================
Removes Orion loincloths. Cryptic did not give Orion females a “no loincloth” option when wearing bikini bottoms, so this removes them.

Skirts Remover
==============
Removes skirts, most of which are Fed-side.
Females who select skirts will now be bottomless.
Note that stockings will still show up, if the character has chosen them.

ATTENTION: If you use the NPC-swimwear remover together with the “Replace Miner Vest & Miner Shirt Short Sleeve with 2013 Risa Swimwear” mod,
then the swimwear will be removed and will not be visible.

=============
Compiled Mods
=============
“Compiled” mods mean that the installer extracts some temporary files and then compiles your custom mod for you. These mods require an up-to-date version of .NET; if you
receive any error messages about .NET, install this package from Microsoft: http://www.microsoft.com/en-us/download/details.aspx?id=17851

Note that selecting any compiled mods will increase the time required to install, and that major game updates may cause these mods to break.
As such, selecting the “Safe Install” option in the installer will disable these compiled mods.

Skirt Legs Fix
==============
Replaces the default reduced-polygon skirt legs with the full legs model. Cryptic uses a different, slightly deformed model for female legs beneath skirts
in order to attempt to avoid clipping issues. However, if the skirts are removed, then there is no clipping to worry about, so this mod will re-add the missing
portions of the legs and hopefully resolve any seams that may have existed between the torso and hips.

CAUTION: If you use the “Risa Summer Wear Remover” mod together with this mod, naturally the swimwear will not be shown, and the Miner Vest and Miner Shirt Short Sleeve will be nude.
Additionally, the textures for this mod will override the female Miner Shirt Long Sleeve textures as well, so using the “Partial Wideneck Tops Remover” mod is advised.
Male miner outfit textures will also be affected.

Most Female NPCs Naked
======================
Makes the vast majority of female NPCs nude. Includes most females of most species. Some species that are NOT made nude are:
-Tellarites
-Some generic aliens
-Most Benzites
-Some Saurians

A known quirk is that some female Saurians will be barefoot/wearing sandals yet still otherwise clothed.
I find this neat and do not plan on changing it. 🙂

This mod also includes a couple hidden features I’ve thrown in just for fun. See if you can find them all!

Customized NPC Costume Mods
===========================
A set of options to change the appearance of various Fed and KDF NPCs that show up on ESD, your ship interior, fleet bases, etc.
The options are pretty self-explanatory.

In addition, the “TOS Tunic” top is affected for both females and males. It may look slightly odd when male characters wear it, as the new textures are
designed for females.

Major thanks are extended to Gandalf of GVZ for helping with this mod.
Additionally, new normal maps are provided thanks to Blayyde a.k.a. Richard Ryley.

There may be a slight “seam” between the torso and hips of female Remans. A belt of some sort goes a long way to hiding it.

There may also be a “seam” between the torso and hips of female Klingons. A belt of some sort goes a long way to hiding it.

Yet again, there may yet be a “seam” between the torso and hips of female Talaxians. Wearing a belt goes a long way to hiding it.

Dynamic Breast Jiggle
=====================
Adds breast jiggle for STO females. NOTE: Breast jiggle will always be active, even when wearing clothing/armor.
Comes in 6 flavors, 1-5 by me and a custom version by Randark.
Also note that on higher settings you may get strange breast physics in certain animations, such as backstepping & jumping while running forward.

New in version 2.4.3 is the option to customize your own breast jiggle setting by editing a few numbers.
You must view and follow the instructions presented after the setup finishes to complete your custom setting.

Major game updates may cause this mod to break, so a “Safe Install” will disable this component.

Increase Maximum Breast Size
============================
Increases the maximum breast size the customization slider will go to.
Comes in four flavors: 1.5x (what I personally use and recommend), 2x, and 2.5x, and custom.
The larger sizes get pretty ridiculous-looking, but if that’s your thing then go ahead.

New in version 2.12.0 is the option to customize your own breast scaling setting by editing a few lines in an .xml file.
If you choose custom, you must view and follow the instructions presented after the setup finishes to complete your custom setting.

Major game updates may cause this mod to break, so a “Safe Install” will disable this component.

Only affects species that use the same skin base as humans (i.e. not other skin options like Caitians/Ferasans, etc.).

Stockings Replacers
===================
Replaces the default female stockings with a lighter version, or fishnet stockings. Choose between one of two styles.
[Thanks for Spanner from Loverslab for this mod!]

No-Launcher Game Start
======================
Adds a shortcut to your desktop that lets you start Star Trek Online without having to go through the launcher. Greatly speeds up startup times!
Note that you still have to use the launcher if a patch is released, but you can then go back to using this shortcut.

Q) Can I acquire the outfits available from fleet holdings such as the Dilithium Mine and Spire, even if my fleet doesn’t have those unlocked?
A) Yes! You can get invited to another fleet’s holding and purchase the outfit from their tailor just fine. The in-game channel “NoP Public Service”
is dedicated to sending out invites for these purposes, so feel free to ask there.

Q) I’d like to change some mod options, and/or update to a newer version. Do I have to uninstall and then reinstall?
A) No, you should just be able to run the installer again and it will auto-detect which components you have installed and let you change them around and/or reinstall with new options.
Of course, uninstalling and then reinstalling is a perfectly fine option too, it just may be more work than necessary.
New in version 2.13.3, the installer will completely remove old versions of the mods during installs and updates, meaning if you had a component checked before and run the installer
again to update, but this time uncheck the component, it will now be removed. In previous versions, under these same circumstances the mod would have remained installed.

Q) Why does there seem to be a “seam” around the waistline of some females when they’re naked?
A) It’s a side effect of removing skirts on some female models. Using the “Skirt Legs Fix” mod will help alleviate this a lot, and/or you can wear a belt to hide it.

Q) Why does there seem to be a “seam” between Caitian necks & chests, and torso & hips?
A) It’s another side effect of the mod. This one is a bit more noticeable, but there’s not much I can do about it, sorry. Wearing a belt and scarf will definitely help cover these up.

Q) Will these mods work on Tribble, the public test server?
A) Generally, no, they will not. These mods are maintained compatible with the live version of the game on Holodeck, and changes that Cryptic makes on Tribble may well
mean the mods cause the client on Tribble to crash, or otherwise impair game function.

Q) Can you remove additional clothing options? Like more KDF pants or Fed shirts?
A) Sadly, some clothing articles just cannot be removed. Generally speaking, only clothing that already has skin rendered beneath it can be removed.

Q) Can I get banned by Cryptic for running this nude mod?
A) Nope, these are client-side only mods; you are the only one that can see them. Cryptic even GAVE us a Localdata folder just for client-side modding!

Q) Will others see my character naked?
A) If and only if they are also using these same mods. These are client-side only mods; they only affect your local machine.
You can prove this for yourself: Install some of these mods, check out how your characters look in-game, then uninstall the mods and check again.

Q) Can I contact you in-game?
A) Only if you already know my @handle. 😉

Q) Can I freely share this mod package with other folks, and at other websites?
A) Absolutely! Just be sure you give credit to everyone as indicated in the credits section at the top, and preferably include a link back to at least one of the two active
threads listed below. Also, do NOT under any circumstances force users to fill out surveys, pay, or otherwise restrict their free and easy download of the mod package.

Q) This seems really similar to a mod I saw on a pay-for-access site. What gives?
A) Eh, it likely is my mod, but someone probably stole it, modified it, and uploaded it there without asking.
I don’t really mind, but the mod is freely available from several different sources, so I have no idea how they expect to sell it!
I guess some people are just really stupid and insist on attempting to sell free nude mods. No amount of scam-warnings or pleas for sanity will work on such people!

Q) Can I make further modifications/improvements to these mods, and upload them for others to use?
A) Of course! I would even recommend that you upload them to one of the two active threads listed below, and if it’s a good-quality mod, I’ll offer to include it in the main package.