The following breeds are exposed with the patch:

Furthermore, the combination seems to be possible quite large. 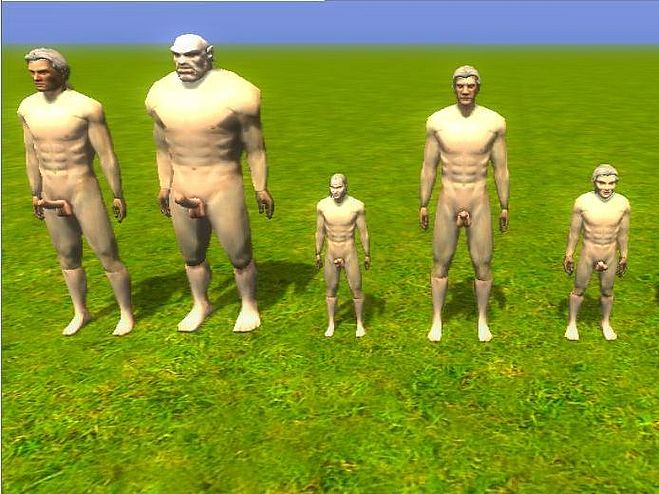 v 1:05 26 November 2007 – The default nudes are now back to zylch000’s,
with BK’s being an alternative. Both of their
boots and gloves are in also. As a small bonus
I’ve also made some blue prints for bare feet and hands
along with a few attempts of various strap-ons
using aleanne’s clothing. If you do not have her
clothing on your server (for mp) or your overrides (for sp)
these blue prints WILL NOT work.

Hello and welcome to the readme! Here you’ll find out anything
you need to know about the nudes within. I’ve listed instructions
on how to use them, known issues and a detailed list of what’s
included.

First let’s take a moment to thank those who made this possible.
That would be Zylch000, Blue pixie, Barrel of Monkeys and
RunnerDuck for their amazing work on creating the nude skin bases
For the races in this package.

Now you’re probably wondering, “Does this mean we get a
weiner? Do I get my pair of ginormous Cohon? ” The answer is yes!
The package contains anatomically correct males, both with
erect and limp versions of their private parts, as well as body
skins both with and without hair for both genders. As an added
Bonus the male private parts fit onto females of all races (with
the “limp” version replaced with a ball-less version for the females).

I’ll also note that this package includes Zylch000’s and Blue goblin work
(With the exception of the wizard robe change), so unless you
want naked wizards you do not need to keep a separate version
of their work. It will therefore overlap with the “Female Body Armor Base”
by barrel of monkeys and runnerduck, but that will not make any
difference to your usage of them ingame.

Usaage game (single player):
For ingame usage I’ve included the uti files for some of the
available designs. Open the console, type “DebugMode 1”
(Without the “) and then type” GiveItem “followed by the
code you want.

The “extremities” are not on the actual skins, they’re implemented as
belt accessories on the armours (not sure if they can be used as
separate belts too). The bare feet and gloves are also under the
armor accessories. All the contents are listed under the Naked type
part of each. That’s the last one on the list for those who’re at a loss
where to find it: P

Type: Naked (brakets contain the second part for each filename)

Gloves:
nk_gloves01.mdb: This comes by default obsidian but, just in case you
did not know, that’s where the bare hands are. The female hands
for eleven o’clock and human females are the exception, these use Blue Imp’s
versions of the bare hands.
cl_gloves01.mdb: BK’s bare hands. May cause white gloves issue with some clothing.

Belt Bug:
It’s a well known problem that will not armor belt accessories
appear when wearing a belt in the separate inventory. As such
if you are wearing a belt when you put on any armor that has
private parts, it will not show up You’ll need to unequip the belt
prior to equipping the armor. This is not to bug and obsidian
something I can fix. Sorry: /

Polymorph / Shapeshift / Wild Shape bug in NWN2 nude patch:
When using a spell that changes your shape for the first time, NWN2
has a bug where your no-clothes Appearance assume whatever you want
were wearing at the time. If you were wearing one of the above
Appearance will be your no clothes is similar to but with some weird
variations in color (which I think assumes the color of some other
part of your body, but not sure which).

Shadow lines in nude patch NWN2: hi res The default female nudes occassionaly may show up
with strange black shadow lines over them, either on the body, the boots
or both. I’ve no clue how or why these show up, but guesses are that it
happens if there’s more than one instance of the same file in your
overrides / Hak. If they bother you too much, use BK’s alternatives.

White Gloves: I’ve discovered that the white gloves issue happens when
the default cloth gloves are replaced with bare hands, but there is no specific
selection is made via the toolset for that outfit (ie leave it at default). I’ve left
a pair of hands in as cloth01, but may change it if there are complaints.

Female half-orc and gnome nudes! The meshes are easily modified
to appear as nude skins, the problem I’m having is wrapping a
texture around the mesh. I’ll have to do a lot of learning to uv map
actually accomplish this, so it might take a while. If anyone feels
like helping or wants to take over this part, feel free to contact me.
And before you ask, female dwarves are going to be especially
hard / impossible to do since beast of “nude” mesh provided by obsidian
is full of dint and folds from the clothes. So I would not hope for it
any time soon.

Bigger wine. As I’m sure you’ll ask, I do plan on making a few bigger
versions, mainly for the human / Halfling / half planetouched /-eleven and eleven o’clock
races, male and female. Seeing as how the half-orc, gnome and dwarf
races probably will not get bigger versions, I made their initial ones quite
proportional. If there’s demand for other sizes or variations I may
consider doing those too.

RunnerDuck and Barrel of Monkeys – for the meshes and textures
Of all the male bodies along with all the bare feet. Honestly these
guys did a terrific job.

Zylch000 & Blue Imp – For their excellent work on the meshes
and textures used on the human and elf female, though I’m sure
most of you have already seen their works.

Necrolord (that’s me!) – For spending all those hours making male
reproductive organs … Believe me when I say it’s enough to give
you nightmares <_ <