The name says it all, an override for the female version of Nude patches Magierrobe. 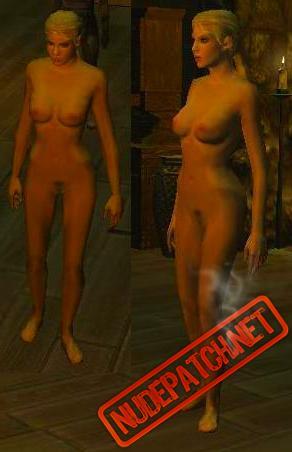 This override pack adds nude outfits in Neverwinter nights 2 nude patch that can be “worn” by female characters and NPCs. The outfits are available to female elves, half elves, humans, halflings, aasimars and tieflings. (I might add versions for gnomes, half orcs and dwarves in the future, as well as male versions, but for now it’s too much extra work)

THIS IS THE SINGLE PLAYER, CLIENT SIDE VERSION OF THE HAK PACK WITH THE SAME NAME.
If you want to use this outfits on a multiplayer server, you need to get the hak instead.

HOW TO USE Neverwinter Nights 2 nude patch:

Simply copy all of the files in this RAR Neverwinter nights 2 nude patch into your \Neverwinter Nights 2\Override\ . This will cause the outfit ‘Wizard’s Robe’ to turn into a nude outfit whenever worn by a female character of the above races. To gain the Wizard’s Robe play a wizard, or buy it from a merchant in game.

– Female textures modified to fit the new MOTB head textures.
– Animation skeleton improved, shoulders, knees and ankles will bend better now.
– The cut-off of the body from the boots was moved to blend better with other outfits.

– Male Torsos: When the outfits will be worn by a male character they’ll have their chests exposed.

– Shadows should now properly fall over the model thanks to improvements in import/export tools.
– Small improvements to textures, plus preperation for a future secondary loinclothed model.
– Next version would probably include bare chested male models.

– Improvements to body model (Neverwinter nights 2 nude mod), especially with it’s connection to the neck. (under some forms of lightings the connection between the neck and body is still noticeable. That is because the head and body are two seperate model and shadows treat them as seperate. While there is no way to change this, in future versions I’ll add optional necklaces that will hide the connection, like in the warlock’s outfit.)
– Small improvements to textures.
– Fixed graphic glitches on NPCs that wear the outfit and are far away from the camera.

– connections between hands to the body and legs to the body improved.
– Textures darkened a bit, added saturation.
– Removed the catsuit outfit that replaced the default outfit, will probably add it as a seperate outfit in the future when I’ll learn how to do it without overriding existing outfits.