The patch is replaced by a new Zoey Nude model.
Lest you read the readme of the installation is not so easy. 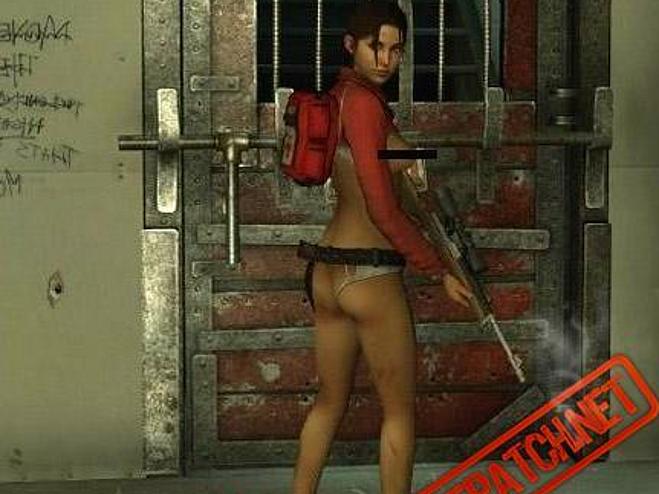 With Easy Install by RootOverload v0.0.9

***DISCLAIMER***
You use this mod at your own risk, I will not be held responsable for any issue,
whatsoever, that may arise from using it. You may not re-use or re-distribute any
part of this mod without my permission.

After a bit of researching I finally managed to get a modified
Zoey model in the game. After much zombie fighting, the zombies
have finally ripped almost all her clothes off.

1. Extract zip contents to your left 4 dead folder wherever that may be..
usually “C:\Program Files\Steam\steamapps\common\left 4 dead\left4dead”

2. Run the game and oogle at Zoey.

2. Open pak01_dir.vpk which is located in your left 4 dead folder with Notepad++.

3. Press Ctrl+F to search for “survivor_teenangst”, then change it to “survivor_beenangst”.
You should do this 4 times.

4. Search for “zoey_color”, only change it to “boey_color” if it is on the same line as “vertexlitgeneric”
or “patch”, you should have changed 2 occurances total. Save and close Notepad++.

-Adjusted breast vertices and bone weights to improve the shape of her breasts.

-Slimmed down and adjusted vertex bone weights in crotch area for better transformation
when moving her legs.

-Added a shadow above her panties on her behind.

-Took care of the stuff that matters, lol.

-Decreased the opacity of the dirt and shadows on the texture, as well as adjusted the highlights on her breasts.

-Adjusted some vertices on her behind.

-Further improved the shape of her breasts.

-changed the instructions, a modified whitelist.cfg and sv_consistency 0 are not needed for this mod.

-Increased the resolution of her ass.

-Discovered the issue of Zoey’s body not rendering correctly when playing as Zoey, which will have to be fixed
in a later update.

-Just about whent bat shit crazy trying to figure out why her hand was transforming weird.
I finally got it most of the way fixed but it’s still not 100%, although it looks worlds better than it did.

-Touched up a few problem areas.

-Fixed a couple texture errors on her belt.

-Added a disclaimer to the Readme.txt

-Fixed the crash problem for the Death Toll and Blood Harvest campaigns.

-Adjusted bone weights around the ass and crotch.

-Added a slight jiggle to her behind for the ass men.

-Tweaked her breast jiggle a little.

-Doubled the resolution of her breasts.

-Her breasts are bigger as a result of tweakin’ ’em around.

-Decreased the size of her breasts which were modified to being too big in 0.0.7.

-Removed the dirt around her abs, and adjusted the highlights on her breasts on the texture map.

-Flattened out her ribs a little on the normal map.

NOTES
———————
-Due to the way shadows are cast in the game, dark vertical shadow lines will appear on Zoey’s
skin when shining the flashlight on her. To fix this, either set your shader detail to medium
or your effect detail to low. This will disable shadows. Turn them off if you don’t want to
see the lines on Zoey.

-She has no facial animations for the time being.

-Latest versions of nude patches are only legitimately found at nude patch.net

Leave questions and comments, and look for updates at www.nudepatch.net