Adds a book dealer in the district in the Imperial City in “The Merchants Inn” adding that if it is placed in the inventory, it replaces the idle animation by a dance.

Idle happen: if the character is bored while he does nothing. 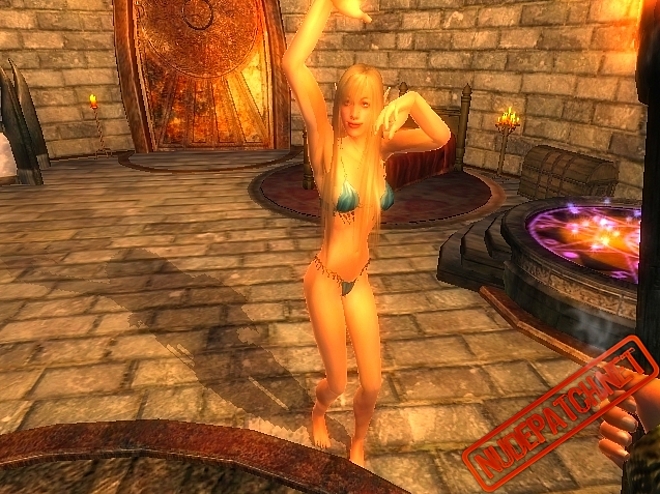 Just go to The Merchant’s Inn in the Imperial City Market District and pick up the book. It is on the bar.
Give the book to a companion to have them dance, or keep it yourself if you want to 🙂

Removed the test npc from the npc list
cleaned, packed, and renamed the new file
Added new Screenshots so you can see what you are getting yourself into…:)
all filenames are still the same, so to update just overwrite everything 🙂
Added a missing .nif file that should fix the issue some people where having when running Oblivion with the 1.2 update

This Dance Oblivion nude patch may conflict with other mods that change npc and player Idle animations.
I have tested this mod with actors_in_chargev0.8 by Trollf and it does not seem to conflict at all,however
the dance animation will not play when the character is playing another idle, resetting animations with Trollf’s
mod seems to take care of the issue…

Bethesda for makeing such a modder friendly game…
The modding community as a whole, if it wasnt for your many forums I would have never gotten started…
Whomever did the Meshes for the book, i dont know who you are, but thanks, I am horrible with that sort of thing 🙂
All the people who are nice enough to take time out of thier day to download this file and test it, your comments will make it(and me)
better 🙂