The Elf queen from World of Warcraft thanking a nude patch looks more erotically and sexly. You should look at Tyrande’s sexy robe in game! 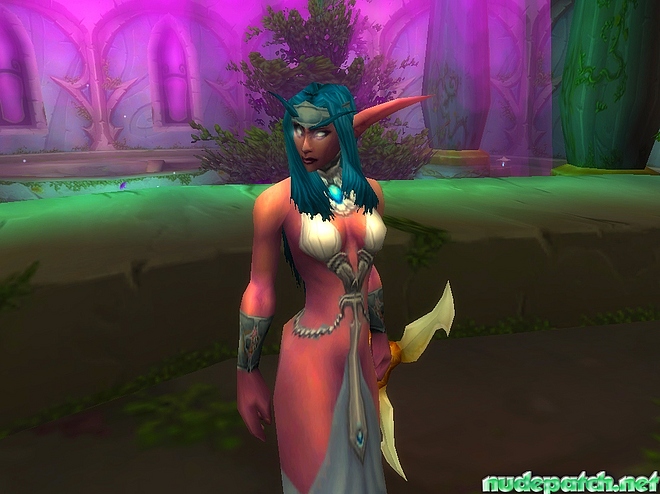 The title possibly a small deceiving, just a patch with npc skins for tyrande made up built a while ago, and I have made a player skin for them. The zip file holds in more or less screens, the de facto MPQ for robes of insight -> tyrande and the files assort so you could use them for some armor you wish.

Mark that on the screenshot the top-part (breasts) are opposed to in the patch. The real patch does not cover the tits, only kind of the area ‘tween the head and the boobs (2nd screenshot = right top).
(Site Note: the orignal NPC skin she based this on is Lazarus’s original edit pre 1.11/2.0 change.

2nd mark: To get a accuarte looking – take the bottom one-half of the clothes from screen 1 and add the unclothed half of second screenshot.
Final mark: the zip contains the psd, pngs, and blps, in the pack and as well re-creates in the MPQ file)

The title may be a little deceiving, but a patch with npc skins for tyrande was made a long time ago, and I’ve created a player skin for it. It’s currently applied on Epic lvl 42 cloth Robe “Robes of Insight”

— update —
I received some PM’s of people that couldn’t get the nude patch to work. It worked fine for me so didn’t quite know what was wrong, but Zilem fixed it for me 🙂

Anyhow the link is updated now so it should work!
The Tyrande dress is now also updated with a nice new preview, once again thanks to Zilem <3

Note from Nude Patch:
It’s a skin (modded Trande NPC outfit ) LazX before skins needed to be in a MPQ.